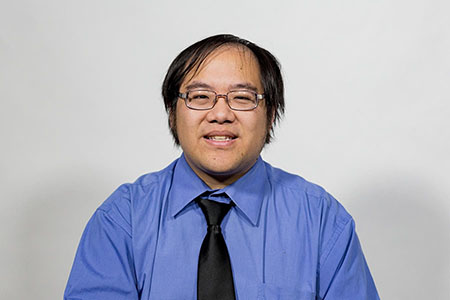 I also have done mobile app development using React Native and am proficient in Liferay Development using Liferay Portal versions 6.1, 6.2, and DXP CE and EE, from my tenures at previous positions.

Outside of web development, I enjoy playing board games (Brass, Food Chain Magnate, and Cosmic Encounter being my favorites), photography, watching and discussing TV and movies (Sci-Fi, heist, and bad movies especially), eating, and taking pictures of my food.

I know how to use third-party APIs too. Here's my Stupid Traffic App. It runs on a Raspberry Pi Zero W in the mornings getting data from the Google Advanced Directions API to tell me which route I should take to work each day in the mornings. It runs every 15 minutes from 8 AM to 11 AM (in case I have morning appointments or somesuch.)

It also dispalys hourly weather data for the day from the National Weather Service in an abbreviated format, to inform how necessary an umbrella is.

A few years ago, my parents became interested in, and began learning, to play the organ. Modern organs are digital. My dad wanted to look into how to position multiple speaker banks to get the best sound in a room.

This speaker visualizer allows placement of speakers currently treated as point sources, and the placement and movement of a 'listener' (also treated and visualized as a point). It traces out the sound rays from each pair of speakers, and computes the formed angle between them.

This project uses React/Redux with a bit of d3.js.

My parents' gate frequently fails to open during the day. I suspect this is because the RF receiver overheats during the day due to poor placement relative to the path of the sun.

This simple script is hosted on a raspberry pi running nginx with a fixed local ip that my parents can access by phone or computer while on their home Wifi network.

This code was my library for reading and handling molecular simulation structure files.

It included general reading and writing superclasses that were extended to read and write PDB, XYZ, and in-house simulation structure file formats. Handling the structure files in an object-oriented fashion allowed for the various objects to handle properties such as distances, angles, and dihedral angles very easy regardless of boundary conditions (of which simple cubic and orthorhombic were implemented).

As of the last commit, main() was being used to compute radial distribution functions.

The 2007-2008 UCSD Circle K Website was my first attempt at web development. Even back then, I recognized I was carrying out a lot of bad practices. API keys and Database passwords are in the files. The front and back ends are not separated, so it is impossible to change the front end without refactoring the back end, and vice versa. The variable naming is atrocious.

But everyone had to start somewhere, and this is how I started. Minus pages that had personal information or Facebook App API keys, pictures with people whose permission I did not get, and files that I do not know the copyright status of, this is the 2007-2008 UCSD Circle K site.

The site included the Automated Member-Accessible Networked Database Accounts, a PHP/MySQL event signup system that handled online event signups, with event subscriptions, a highly customized administrative tool suite for board members, simplistic analytics tools, and a semi-automated MRP-display system. There was also a Facebook App that displayed the week's upcoming events. (The code for that was not included here).

While I have permanently transitioned out of that industry, presently I continue to apply the 9 years of development experience, data science skills, analytical experience, presentation skills, teaching experience, debugging skills, and problem-solving expertise that I gained to projects in both personal and professional contexts.